Don't believe me - Here is part of an article published about Prospecting for Gold in WA in the Sunday Times in Western Australia 28th February 2010 entitled "Gold Fever Grips" by Trevor Paddenburg.

"Amateur gold prospectors armed with metal detectors picks and shovels are striking it rich in WA.

And gold fever is gripping the State as miners unearth nuggets "the size of Footballs" - and bigger. Nuggets that size weigh in at more than 8kg with a value topping $300,000

and later in the same article...

"one was definitely the size of a football, another one was almost as long as your arm' ...a few paragraphs into the story

Keen prospector Matt Cook said he'd seen a nugget as big as a basketball, but agreed prospectors were a notoriously secretive lot. 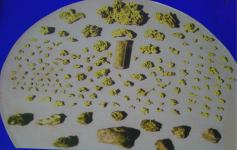 Udo has found hundreds of ounces while prospecting for gold over the past 10 years including nuggets of 22 ounces, 8 ounces, 5 ounces and a number of of 4 ouncers.

Here is 75 ounces of gold nuggets he found with the 22 ounce nugget shown at the top of the display.

There is still patches of gold like this to be found.

There are many stories in the Gold and Gemstones magazine that will quickly show you here is plenty of Gold left in Western Australia....

All you have to do is get out there and find it...

How can you easily tap into the gold that is available out there?

Our aim is to provide information about prospecting for gold to you in simple language and put the odds of finding gold firmly in your favour.

You will need some background information so you can understand the basic knowledge to give you the best chance to find gold. 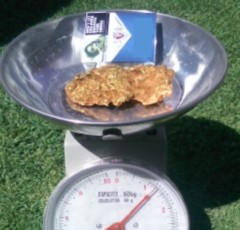 There is still gold like this to be found!

All you have to do is get out there and give it a go!

Return to home page from Prospecting For Gold

This Website is Continually Changing
So please bookmark us and come back regularly.
OR.. sign up for our egold newsletter to keep up to date with trends and knowledge about gold prospecting!

Home | About Us | Disclaimer and Terms of Use | Newsletter Archive | Sitemap